Every soccer tactic ever invented revolves around a team’s formation, game rules and the individual roles of the players in that formation.

Knowing each position on the soccer field is important for players, coaches, and fans. Through understanding the meaning of different formations at different age levels, you will be able to understand and appreciate the entirety of a youth soccer game.

I like to think of soccer as an extremely simple game that has been completely overcomplicated. The essence of it all is two teams of 11 players working to put the ball in the opposition’s net. In between all of this comes the confusion, with formations being the starting point.

So let’s get straight into it… Here are the classic soccer positions relevant to their classic number pairings for an 11 v 11 game.

Before players’ names were printed on the back of the shirts, the players would wear the number of the position they play. So if I was a striker I would wear number 9. This has died out in recent times, but when creating formations on tactics boards, generally, this format of assigning numbers to players is used.

Here you can clearly see how the number system looks on the field. 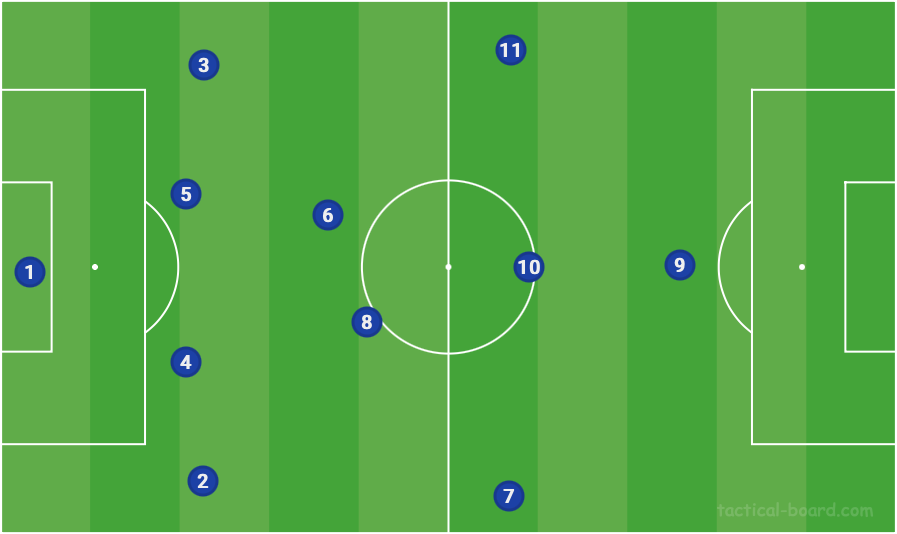 The main focus in a formation is to provide structure and support in defense, whilst allowing enough players to attack and score goals. Youth soccer has the exact same principles. This is why these positions directly transfer from 11 v 11 right down to 6 v 6, the only difference is there is a lower quantity of defenders, midfielders, and attackers.

Depending on the age group, youth soccer progresses from 6, to 7, to 8, to 9 a side. Having smaller teams not only provides the kids with more practice with the ball but also reduces the number of tactics and chaos that is involved. In this article, we will explore the best youth soccer positions and formations for you to adopt in 5v5 6v6 7v7 8v8 9v9, and 11v11 soccer. We’ll also look at the strengths and weaknesses of these formations to help you become more knowledgeable as a fan, coach, or player.

Youth soccer begins at U6 or under. At this age, kids will usually play with 3 players per team. Since it is not competitive and more of a learning experience,I have not included formation options for this age group. Similarly, once you get to U8, players are generally more skilled and knowledgeable of the game of soccer. They will be able to grasp positions better and, although they will want to run around most of the time, will stay in their intended areas.

However, at U8, players are still too young to be peppered with formations, instead of focusing on their development. The best approach. Also, it is only played with 4 players per team, so there is not much leeway to create formations. The first age group where this information will really help you is after this age group, where you will see 5v5.

In 5v5 soccer, players are still very young to be learning this side of the game. But for coaches and fans, this is a great time to learn the roles of positions and different ways you can lead your team out. 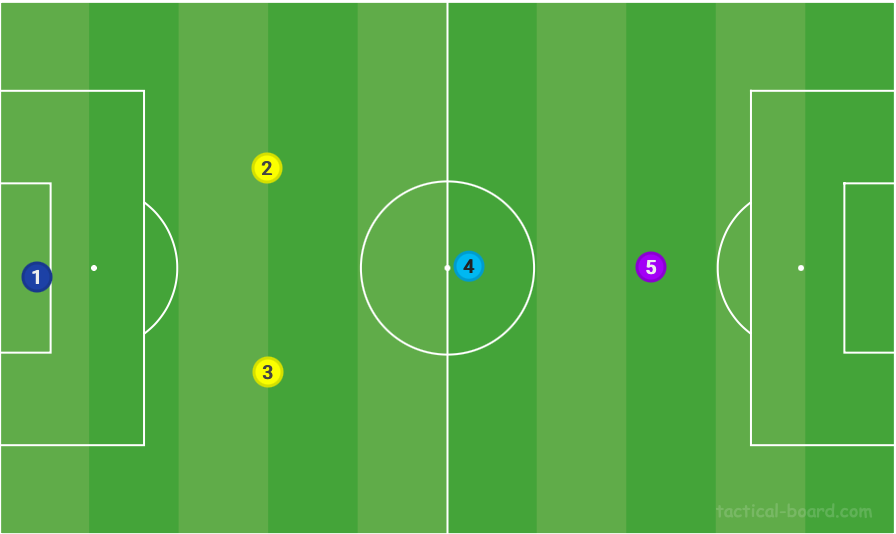 This formation places a focus on defense. Here, this would be called a 2-1-1 formation (when naming formations you don’t include the keeper). This formation allows the defenders to stay back and focus only on defending and gives space for the midfielder and attacker to stay forward.

The 4 and the 5 can both occupy the wings as well as stay central which is very effective against other rigid formations. 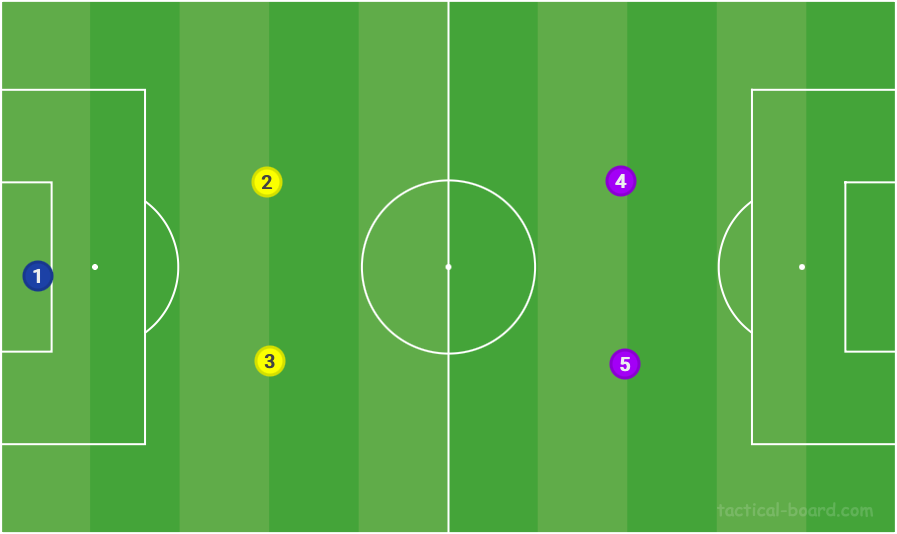 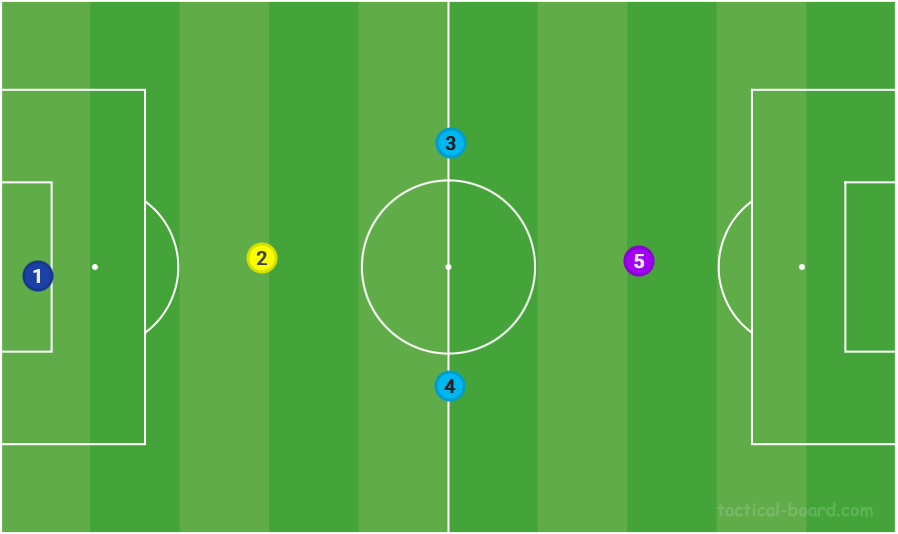 This formation is most effective when the players you are working with have a more developed soccer brain. The 1-2-1 formation is often used in 5-a-side tournaments as players can interchange quickly and create overloads in defense and attack.

This formation is too complicated for the majority of players in this age group, but nonetheless, if it works for you, then use it! 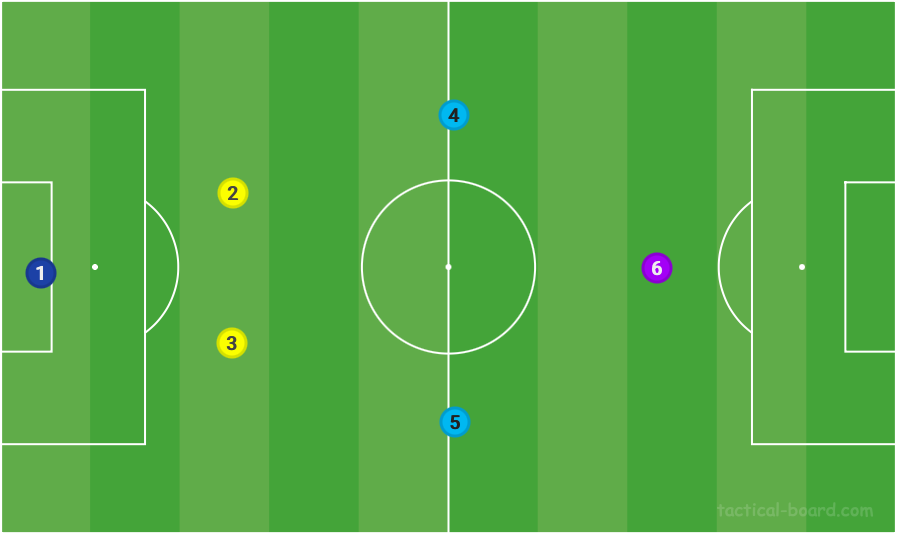 The most common formation in 6v6 is the 2-2-1 formation. This is because you have a solid foundation with 2 defenders and 2 midfielders. This will limit the opponent’s chances to score.

You also can play wide since the midfielders can act as wingers. 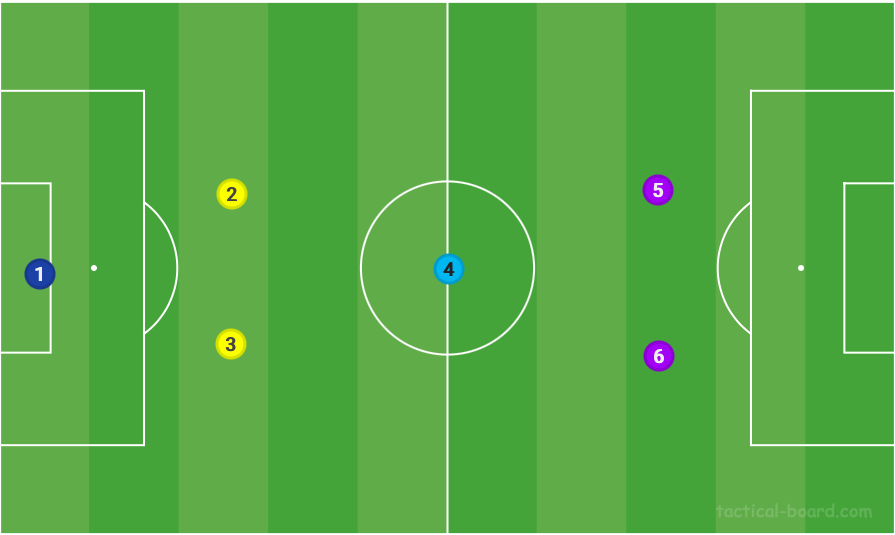 This formation is perfect for when you have a star player on your team. Since #4 is in the middle of the field, they are the link between defense and attack. You will have a lot of success if you place your best player in that position who can complete that job.

Again, this formation provides a lot of balance at both ends of the field, which allows for chances to be created. However, there is not the same opportunity to play the ball wide as the previous formation since it is very compact. 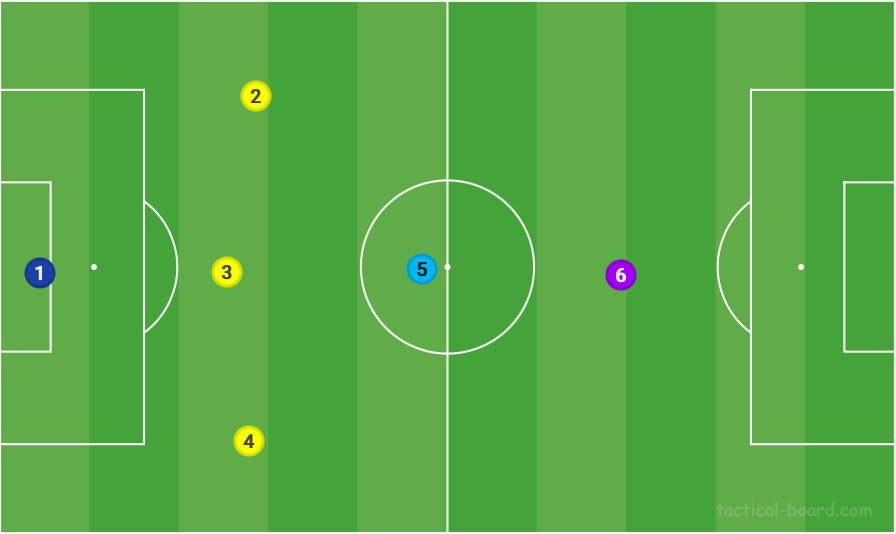 Although on paper this formation looks very defensive and may only warrant a ‘park the bus’ approach. However, when done correctly, it can be extremely effective against the common 6v6 formations.

This is the first time we are seeing ‘full backs’ or ‘wing backs’, and here, they are the key to success. The 2 and 4 will be required to attack just as much as the defender through running up and down the lines and putting crosses in for the midfielder and striker.

7v7 is generally where things start to get interesting tactically, coaches can now teach more of the tactical side to their team, so formations become much more important than in previous years. 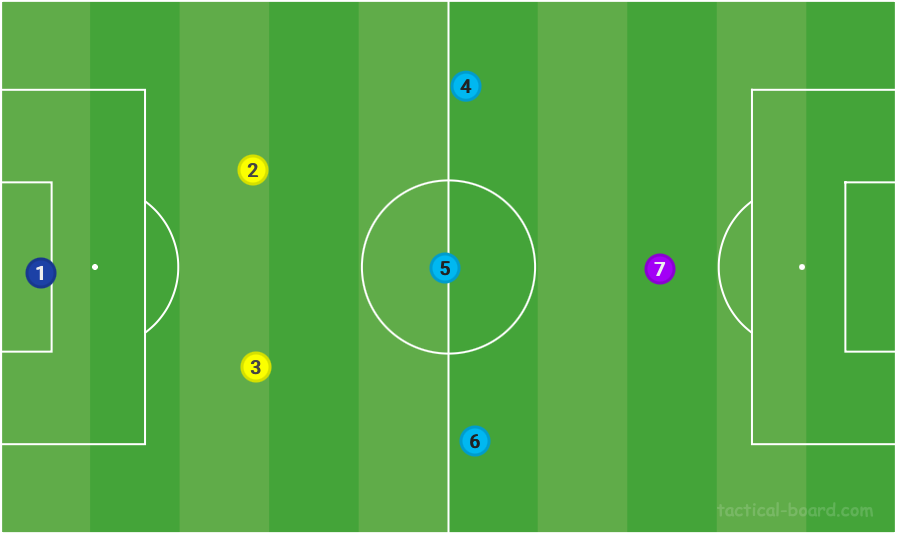 This is the classic formation when it comes to 7v7 soccer, and there is a clear reason why. This formation gives you just about everything that you want. You have a solid base of 2 defenders and 3 midfielders which will be difficult to play through. There is width with the 4 and the 6 playing by the touchline. Finally, there are many avenues to attack the opposition goal from.

The winger’s role is to stay wide and provide the team an outlet through either side. They are also responsible for putting balls and getting on the end of balls that are crossed into the box.

Here Raffaele Tomarchio shows an excellent visualization of how the tactics in this formation work. 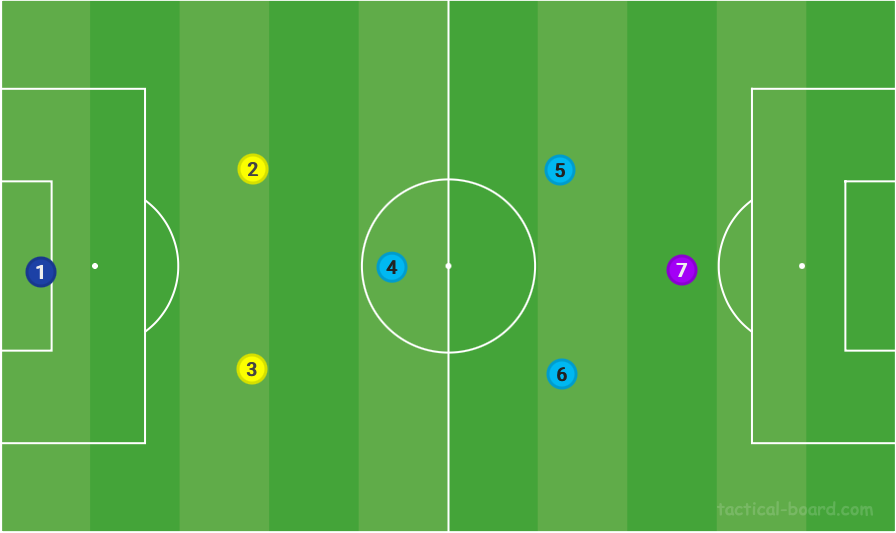 This formation is very similar to the previous one, but instead of focusing on being wide. The 5 & 6 here play more centrally and attack the opposition’s defense.

Most of the team, other teams will play with 2 defenders, and very rarely with 3. This means that most of the time you will have an extra player in attack which significantly increases your chances of scoring. 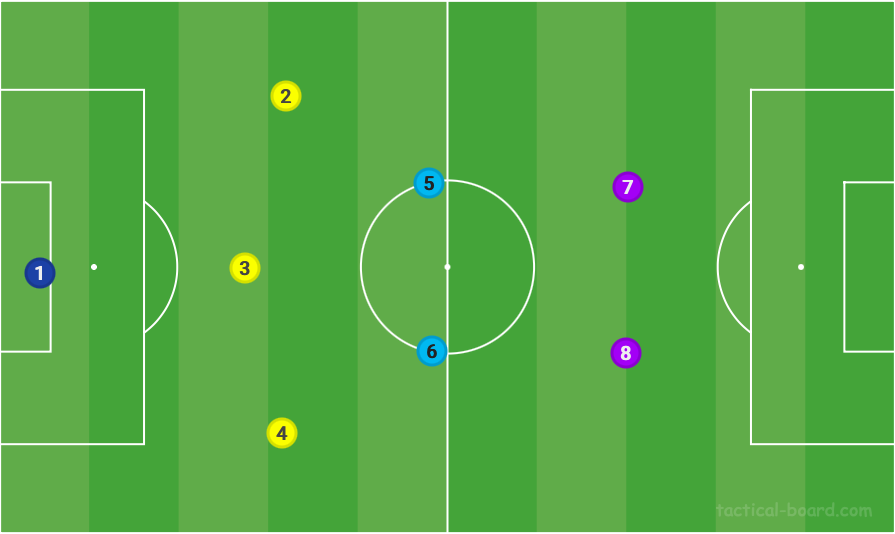 8v8 soccer can be at times rather awkward when deciding which formation and position to put your players in. This is because one area of the field is likely to be out of your team’s complete control unless you have excellent players. For example, in this formation, your center midfield players (5 & 6) need to be willing to do a lot of running in order to cover the wide areas.

When attacking, the 2 and 4 can run up and down the wings to provide width, but when defending, they must keep compact and in a line with the sole center back. This means that the 5 and 6 need to cover these areas. Thus, this formation is considered excellent in attack since the strikers can support each other but requires a lot of work in defense. 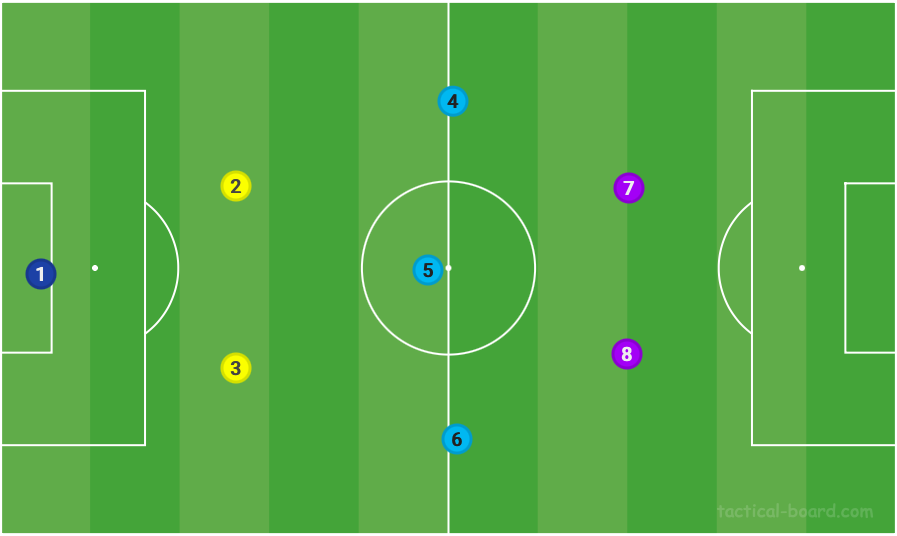 The 2-3-2 looks to create a solution for the previous formation by having designated wingers to provide width. Here, the 4 and the 6 are the keys to your success. They will need to create chances in the attack, and track their opponents back in defense.

If the 4 and the 6 do not have the correct fitness levels to do this amount of running then the formation will not work. This is because when the opposition is on the attack. Most of the time they will have a numerical advantage over your defensive players. 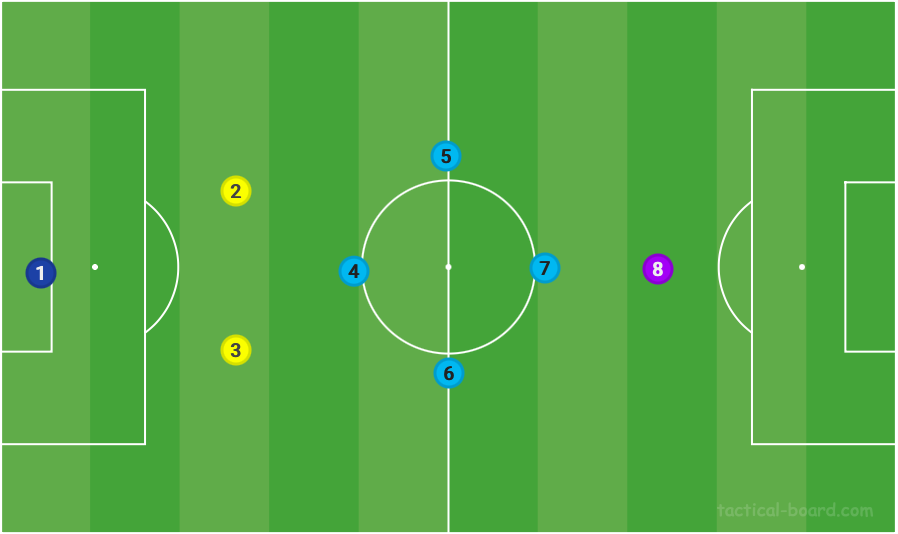 For teams who maybe have fewer athletic players, but still have a team of good soccer players, this formation works a peach. The midfield ‘diamond is the key here and you need to have players that understand the difference in these positions, as well as possess the skills to play them.

First, the 4, this player is a defensive midfielder and is responsible for receiving the ball from the two center backs, keeping it, and playing it forward. They should also be able to break up play and make tackles.

Although the 5 & 6 aren’t wingers, they still should be a wide option, and be able to get out and challenge the opposition wingers/ full backs. The 7 is responsible for making things happen, to be creative. They should be able to turn on the ball and either beat a player, play a pass wide, or slip the center forward through on goal.

This diamond shape is used by professional teams all the time since it is so effective when done right. 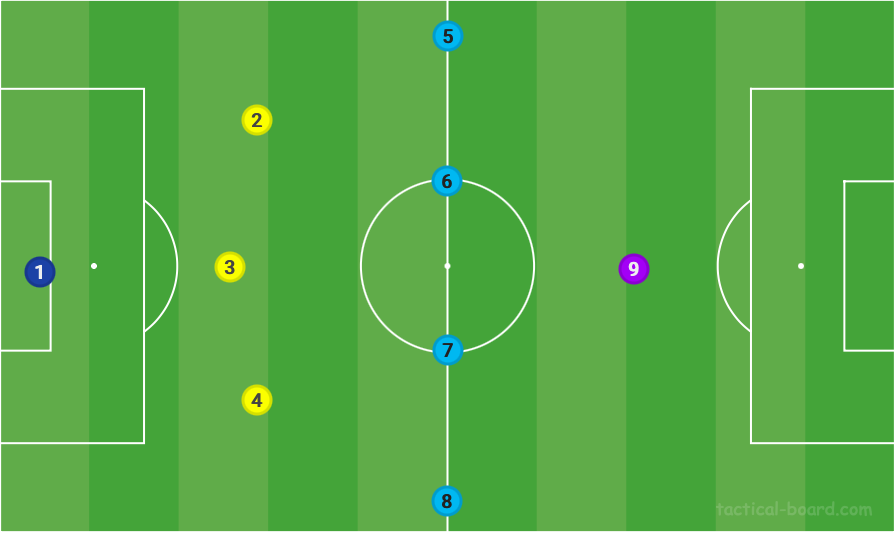 Here, the players are positioned very defensively. However, through some tactical changes in the midfield, this formation is very fluent and allows for a quick transition to attack.

This formation is built around the 4-4-2 formation in 11v11 which is the most classic and famous of all soccer positions. In youth soccer, you need to translate 11v11 into your domain. For example, since the 3-4-1 is built off the 4-4-2, what should we be trying to do. We should try to communicate to the 6 and 7 that when one of them goes, the other stays to give us balance in defense.

There are multiple messages that you can give to your players for this formation, but overall, despite being extremely solid in defense, you need to give support to the center forward in order to challenge the opposition’s defense.

Here Raffaele Tomarchio demonstrates a great example of how to do this through the wingers. 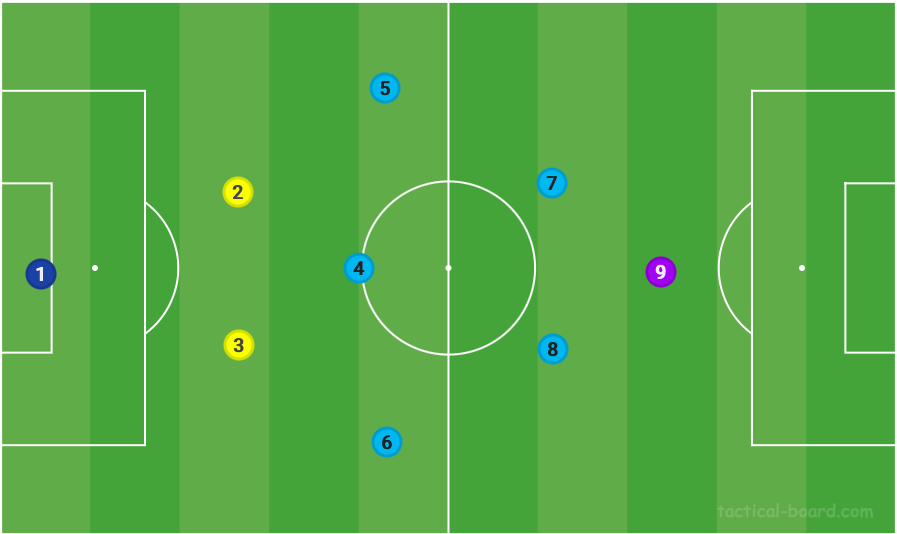 Here is a slightly more attacking formation that includes the two pivotal roles of the 5 and the 6 acting as wide midfielders/ wing backs. Here the 4 is now a defensive midfielder and will sit just in front of the two center backs. The 7, 8, and 9 need to work together creatively in the middle of the field.

I hope this article provided you with the tools to understand youth soccer positions and formations when watching/ playing or coaching youth soccer.

Once there are 11 players on the field, there are numerous ways to alter the positions slightly to change the lineup. For coaches and players, the best way to understand where you should play or who you should play in a certain position, you need to match skills with what is required of that position. Building off these youth soccer positions and formations is the best way to make the decision.

4 Tips on how to be a great youth basketball coach

How to Manage a Youth Football Game